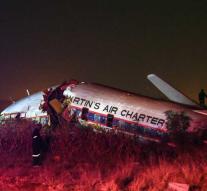 pretoria - The crash with the historic Convair in South Africa has demanded a second life. It is a South African who was present in the building against which the plane crashed. That is what Peter Mashaba of the South African Civil Aviation Authority (SAACAA) says. This service investigates the accident.

According to South African media, another ten people were injured in that building. Three Dutch employees of the Aviodrome aviation museum, who were in the aircraft, were slightly injured due to the crash. A passenger, presumably the pilot, was killed. There were nine people on the plane according to Aviodrome.

Mashaba can not say anything about the identity and nationality of the victim on the plane.

The crash happened during a test flight. Three Dutch employees of Aviodrome, technicians, were in the phone and were slightly injured, according to a spokeswoman for the theme park. The three suffered relatively minor injuries. For example, one of them has a broken arm.

Aviodrome recently acquired the device. The intention was that this summer it would fly to the Netherlands in several stages. When it went wrong during takeoff during a test flight on Tuesday, South African technicians were among them.