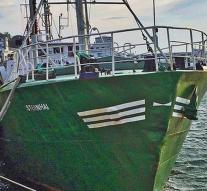 - "Two German aid workers get into the Mediterranean sea are refugees from Saturday arrested by the Libyan coastguard. That made the guard known on the grounds that feed the two without permission in Libyan waters."

"Social workers belong to the private relief organization Sea-Eye. With a rubber speedboat they had crossed the border from Tunisian waters. The mothership Sea-Eye, a nearly sixty years old cutter, sails under the Dutch flag. This was en route from Malta to Libya, the Lybia Herald reported."