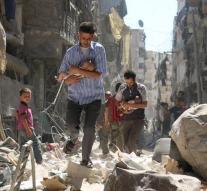 - "Two aid convoys be stopped since Wednesday morning in a strip of no man's land in Syria. The trucks were en route from Turkey to the Syrian city of Aleppo. They can not continue. Both Damascus and the rebel movement will decide who brings what help to the city."

"The convoys each consist of twenty trucks. They provide food and flour. After they crossed the border drawn by the Turkish city Cilvegozu, they have come to a halt 40 kilometers west of Aleppo. In the city await thousands of hungry residents. Those trapped in the devastating conflict between rebels and Syrian army units."

"The Syrian opposition politician George Sabra said Wednesday they have little confidence in the cease-fire. The file, which entered Monday night and lasts a week, running in his danger by the government in Damascus claims the whole of the aid convoys for Aleppo. is in the file that relief would be allowed. However, the regime refuses help coming from Turkey because Ankara supports the rebels."