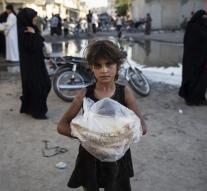 - "A convoy of twenty trucks with relief supplies on Tuesday crossed the Syrian border from Turkey. That said an eyewitness told Reuters."

"The trucks drove in the Turkish border town Cilvegozu across the border. The Turkish government has previously indicated that it wanted to bring relief to the besieged northern Syrian city of Aleppo after the cease-fire which took effect Monday took effect."