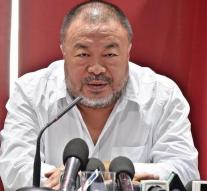 - In a speech in New York, the Chinese artist Ai Weiwei said that art is political in nature must be 'otherwise it's not art.' 'Art gives us the ability to be people involved and to speak not just blah,' the in China's controversial artist Ai Weiwei.

In his homeland, the art so much under control that no political influence may have more: 'Where there is no freedom of expression in the country, nothing changes. And that is the case in China, 'Ai Weiwei said during a discussion at the Brooklyn Museum of Art.

Ai Weiwei is a conceptual artist who is known to not mince words and come into trouble several times in China. He lived from 1981 to 1993 in the United States. After his return to China, he was arrested in 2011. In 2015 he was given back his passport.