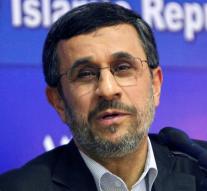 tehran - Mahmoud Ahmadinejad will not return as president of Iran. Tuesday he announced that he did not participate in the presidential elections next year.

Ahmadinejad has bowed to pressure from Ayatollah Ali Khamenei. Who said that the participation of Ahmadinejad would be bad for the unity in the country. ' I follow the will of the leader of the revolution and do not intend to participate in the elections, '' said Ahmadinejad.

The conservative populist Ahmadinejad was president from 2005 to 2013. He was succeeded by the current president Hassan Rouhani. Which is more moderate, and signed a nuclear agreement with the major powers. Iran must return to the polls no later than May 2017.