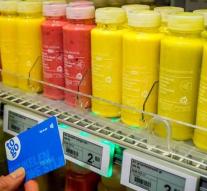 zaandam - Albert Heijn equips the first AH to go stores with technology for cashless shopping. Customers of the two branches in the Amsterdam Medical Center (AMC) no longer have to wait in line for the cash register from Monday. Next week the AH to go will follow at the metro station on Amsterdam CS.

For cashless shopping, customers must scan a card on the shelf with a special card. The amount is automatically debited. The so-called 'tapping' is also possible with an Android phone. Other operating systems such as iOs and Windows will follow later.

It is according to the super for the first time that something like this is possible in Europe. A spokesperson compares the system with the cashless Amazon Go stores in the United States. But Amazon mainly uses cameras. With AH to go, automatic payments go through CM technology. com, a platform for messages, calls and payments.

Albert Heijn had been busy with the preparations for a while. In December last year the super started with a test in the AH to go at the head office of parent company Ahold Delhaize in Zaandam.

It is the intention that in the near future no cash register will be needed in all of the eighty AH to go stores. Incidentally, the renewal does not mean that the cash registers disappear from the stores. For the time being, the old-fashioned way of payment is also possible.