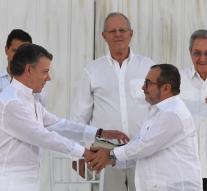 The agreement was signed in the presence of foreign guests, including Secretary-General of the United Nations Ban Ki-moon, US Secretary of State John Kerry and the Dutch Foreign Minister Bert Koenders. This agreement ' called it a major step towards peace in Colombia and stability in the 'region.

On Sunday, October 2nd speaks the Colombian population is still on the peace agreement in a referendum.

The internal strife in Colombia has an estimated 220 000 people died.