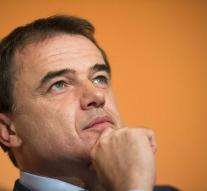 name - The French-speaking socialists lose power for the first time in Wallonia for almost 30 years. The Christian Democrats (CDH) and Liberals (MR) reached an agreement on the formation of a new government on Tuesday. It is expected that this week will be given the confidence of the Walloon parliament.

CdH chairman Benoît Lutgen laid a bomb under the Walloon government five weeks ago by withdrawing from the coalition with the Party Socialist. He also did not want to merge in Brussels with the once-opposing PS. He protested with the PS against a series of 'sickening' scandals revealing friendship politics and a grain culture.

At a press conference on Tuesday in Namur, Lutgen and MR Chairman Olivier Chastel explained their plans. Employment is one of the priorities. They also want less officials and more publicity in Wallonia.