Home / World / 'Aggressive passenger Transavia tries to get in cockpit' 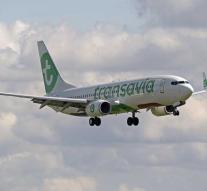 nice - A Transavia plane made a stopover in Nice because of the dangerous behavior of a passenger. The man tried to enter the cockpit, say France Bleu. Also…

The man's arrest was filmed by a fellow passenger. It shows how safety people pull and discard the opposing passenger from his seat. The man then shouts 'Allahu akbar', Arabic for god is the greatest.

The authorities do not think that the man had terrorist plans. Research showed that he has psychological problems.

The aircraft left Paris on Thursday afternoon and had Tunis as its final destination.