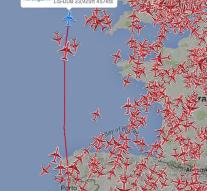 - Bijtgrage a passenger aboard an Airbus from Lisbon to Dublin is deceased on board.

It happened Sunday night on a flight from Aer Lingus Airbus. A 24 year-old man was irritated at yet unknown reason. After an hour flight - the flight takes two hours - the man biting a fellow passenger. When he was restrained he became unwell and then he fell down unconscious.

Doctors on board have tried in vain to save the man. The flight with flight number EI485 then had to move to Cork Airport.

The 170 passengers and crew were interrogated by the police. A woman who heard highly likely in the deceased man was arrested on suspicion of drug smuggling. The man who was bitten was taken to the hospital. The rest of the passengers after three hours could continue the trip to Dublin, with another aircraft.