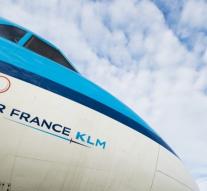 - Five employees of Air France who attacked early October, managers of the company and literally tore the clothes off, stand Wednesday in court. The chef and staff were one of the directors to the people who were attacked after a union meeting and had to flee.

On that union meeting lights managers plans for cuts to the difficulty in running Air France. The airline has already dismissed four of the aggressive employees. A fifth man also risking dismissal. But the proceedings against him in the hands of a public authority.

Eleven other workers were sent as a punishment for two weeks on unpaid leave.