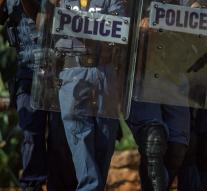 johannesburg - South African officers turned themselves after a video was made ​​known when we see how they kill a prisoner.

The images show how an officer arrested a man who had been hit in the shoulder and chest, close to the main shoots. The man was already lying on the sidewalk after he was shot in the shoulder during his flight from the police. He was suspected of theft.

The officers, three men and a woman, be prosecuted on suspicion of murder.

South Africa is extremely violent by high unemployment and the aftermath of the apartheid regime.