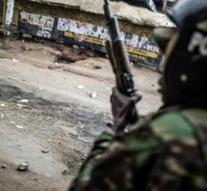 nairobi - Eight policemen were killed in the east of Kenya when they drove an explosive vehicle. According to the police, the bomb was placed by terrorist movement al-Shabaab from Somalia.

The police spokesman confirmed that five agents and three reservists had been killed 'while protecting the borders and security of our country.' Al-Shabaab spokesperson said they had killed ten Kenyan soldiers.