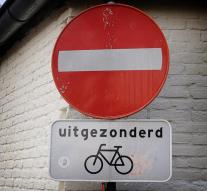 renesse - A 48-year-old man from Renesse was arrested Saturday in his hometown because he threatened an officer with death. The defendant disagreed with the ticket that got the driver of the car in which he sat.

The man got out when an agent wrote out a receipt for the woman because she drove up a road which was closed to traffic. He wanted the ticket was reversed, otherwise he would cut the throat of the agent.

Because the man is a known perpetrator, police reinforcements were called to arrest him. After some verbal violence and resistance, the man was arrested. He is still in custody.