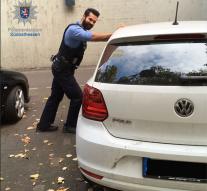 offenbach - How do you get quiet a crying baby? By rocking. A police officer in the German city of Offenbach was faced with the heart-rending cries of a baby in a car. There was only one possibility: the agent rocked the whole car. The baby fell asleep.

The thirty mother of the child wanted to get something out of the trunk when the door of the car fell into the lock with the key still in the ignition. Just then began to cry her child. The woman could not go home to get the spare key, for her house key was still in the car. A policeman moved the small Volkswagen successfully rhythmically up and down until the fire department arrived to break open the car, the police said on Facebook. 'End good, all good,' it reads.