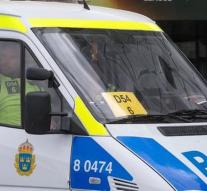 stockholm - In the Swedish capital of Stockholm, a police officer was attacked at a subway station from behind and stabbed in the neck with a knife. The agent was able to warn colleagues who were soon on the spot and could suspect the suspected perpetrator, reports Swedish media.

The incident took place around 10:30 at Medborgarplatsen. The magazine Aftondbladet noted that the detained suspect was around the thirty years. His motive is unclear.

The injured agent has been transferred to a hospital. The police could not say how he was. The police have dropped the square.