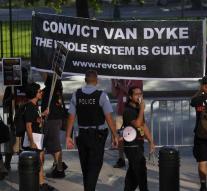 chicago - A white cop in Chicago has been found guilty of murder because of the shooting of a black teenager in 2014. He can go to jail for up to twenty years, reports The Washington Post.

Seventeen-year-old Laquan McDonald was struck in 2014 by sixteen bullets from agent Jason Van Dyke's firearm. The incident was filmed with a dashboard camera in one of the police cars. It shows how the agent keeps shooting after the boy was already lying on the ground. The death of McDonald led to massive demonstrations against police violence.

Van Dyke stated that he had previously felt threatened because the boy had a knife. Van Dyke's colleagues are also being prosecuted. They would have made incorrect or misleading statements about the circumstances surrounding the death of the teenager.