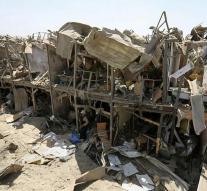 kabul - An attack by the Taliban on a hotel in the Afghan capital Kabul on Monday a policeman killed. The three perpetrators were killed. Guests and the Northgate hotel staff, in addition to the Kabul airport, were unharmed.

In the hotel stay especially foreigners, both military and civilian aid organizations, for example. According to the Afghan police, the perpetrators left first detonated a truck filled with explosives. One of them therefore was killed, but police managed to prevent the other two from entering the hotel.

The two terrorists holed up near the hotel between containers. Special forces shot the men dead in the morning.


The attack was claimed by the Taliban. The group said in a statement that,, a place full of luxury for foreigners '' was targeted and that but were slain or wounded up to one hundred enemies. That story is not so according to police.

It was not the first time that the hotel was targeted by the Taliban. Came at a previous attack in 2013 five security guards were killed.