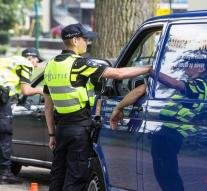 - A 39-year-old police officer was also sentenced on appeal for an attempted homicide on a fugitive motorist. The court in The Hague, the agent a prison sentence of one month and a community service of 240 hours. This punishment, the court also previously expressed.

During an alcohol control in August 2012 on the Eendrachtsweg in Rotterdam revealed that the driver was intoxicated. He was told that he could not drive anymore and that he had to get out.

When the driver still drove away, the policeman with his service pistol shot three times. The driver was hit and has therefore incurred include paraplegia.