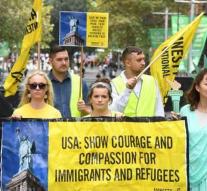 washington - Nevertheless, a backstroke for President Donald Trump regarding his controversial temporary ban. The Supreme Court now ruled that people who have family members in the US should not be allowed to be turned away.

The supreme judges, who agreed in June to restrict the admission of travelers from six Muslim countries, judged by six to three that now people with grandparents and other blood relatives in the United States should be accepted. That already applies to spouses, children and parents among others.

On another topic, Trump made a success. The court provisionally blocked a ruling from a lower court that would open the borders in the coming months to potentially thousands of refugees. That verdict has been ruled in anticipation of the appeal that the government has lodged with the Appeal Court in San Francisco. In October, the Supreme Court extends the arguments for a ban on entry.