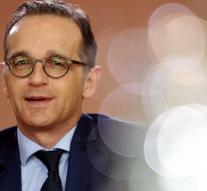 bamako - Again, a German government plane has suffered a breakdown. This time foreign minister Heiko Maas had to deal with it. He was stranded in Mali after having been in West Africa for almost a week. 'I have…

It was the intention that an Airbus A319 Maas would return from Berlin to Berlin on Thursday evening. A spokesman for the German Air Force said that the aircraft had to be grounded due to a considerable leak in the hydraulic system. A replacement aircraft can only depart from Cologne on Friday morning to pick up the German delegation.

It has often hit the past few months. Chancellor Angela Merkel even came too late for the G20 summit in Buenos Aires.