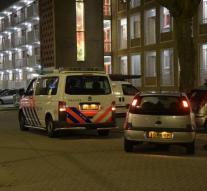 rotterdam - The police are investigating Tuesday evening or several reports of a shooting in the Melissant Street. A day before, a sting party took place.

At the moment, the police are investigating whether it has actually been shot, for example, by searching for empty sleeves. However, because of the many reports it seems obvious.

For the moment, the police received no messages about injured persons. 'But it's very recent,' said a spokesman.

On Monday there was a sting where a injured person fell. The police also investigate whether there is a relationship between both incidents. 'There we are looking at right now. Whether we have a connection, we do not know yet. '