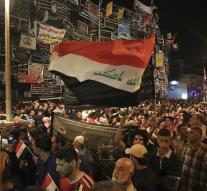 baghdad - Shiite Muslims in Iraq Thursday night again hit by deadly terrorist violence. A suicide bomber detonated a bomb belt to the gate of a mausoleum in Balad, 93 kilometers north of Baghdad, after two gunmen opened fire on Shiite pilgrims who were visiting for the Eid. At least thirty-five people were killed, reported sources within the authorities.

The perpetrators shots around him, after one of them blew himself up in the crowd. The other would be shot down before he could do the same. Islamic State has claimed responsibility for the attack. About sixty people were injured.

Sunni terrorist movement in Iraq loses more and more ground, but it always manages to use brute force against civilians. A Shiite neighborhood in Baghdad last weekend was affected by far the deadliest attack which occurred after the American-British invasion of 2003.


The death toll of the suicide attack with a truck full of explosives has now risen to 292, the Iraqi Health Ministry reported Thursday.