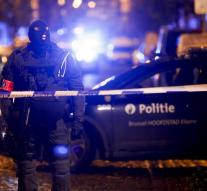 brussels - In the Brussels municipality of Sint-Jans-Molenbeek again Sunday night raids carried out in the investigation into the attacks in Paris. That report different media and confirmed by the federal prosecutor.

Include in the Kempen Street and Independence Street, the police raided homes. According to the federal prosecutor, there were indications that Salah Abdeslam, the fugitive suspect in the bombings in Paris, would there hiding, but the man is not found. There were also arrested no other persons.