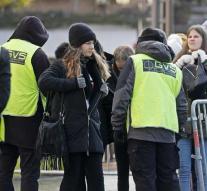 strasbourg - The police came into action with many troops in the Neudorf district of Strasbourg. The action is, according to the Dernières Nouvelles d'Alsace, on a street less than a mile away...

It is not known what the purpose of the action is. The police are looking for the as yet unprotected main suspect of a terrorist attack in the city, Chérif Chekatt. He shot on passersby on Tuesday and was last seen in Neudorf.

That is why there was a lot of police on Tuesday in Neudorf. At the attack three people were killed and thirteen injured.