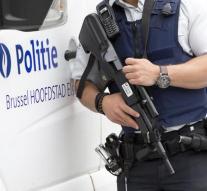 - A neighborhood in the Belgian city of Liege was evacuated Sunday morning when a man with a machete wildly swung. The man, in his twenties of Turkish origin, was arrested.

No one was injured. The man is no friend of the Belgian police.

Saturday there were two policewomen in Charleroi stabbed with a machete. They are kept in artificial coma. The perpetrator, a 33-year-old Algerian, was a soldier,, '' of Islamic State. That Amaq, the press office of the extremist movement, let us know.


The attacker was staying since 2012 in Belgium and was known to the police, but not because of terrorism. He was shot dead by police.