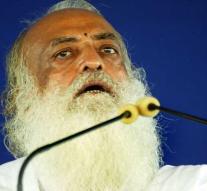 new delhi - The 77-year-old Indian guru Asaram Bapu was found guilty by a court in India of the rape of a sixteen-year-old follower in 2013. He thus risks life imprisonment. The penalty is determined later.

It is the second guru in a fairly short time who is found guilty of rape. Last August, Gurmeet Ram Rahim Singh was given twenty years in prison for abuse of two female supporters.

Asaram Bapu was caught shortly after the offense and has been stuck ever since. He has denied. The girl accused him of abuse when she visited him together with her mother in his complex in Jodhpur. The parents of the victim have been followers of the guru for years.