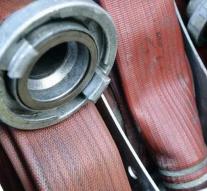 moscow - Due to a fire in a shopping center in Moscow, a death has certainly fallen. According to local media, at least three hundred people were brought to safety.

It is the second time in a short time that Russia is startled by a fire in a shopping center. By a fire about a week and a half ago in Kemerovo, more than sixty people died, especially children.

The fire in Moscow raged in a mall specializing in toys. The complex opened in 2009.