Home / World / Again explosions heard at UN base in Mali 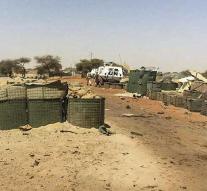 bamako - In the Malinese city of Timbuktu, loud explosions have been heard at a UN base where a blue helmet was killed last week and several people were injured after an attack by Muslim extremists.

According to a source at the United Nations, the base has been fired at with mortar fire. Witnesses in the city certainly counted three explosions. There are no reports yet about possible victims.

Last week, attackers fired dozens of mortar grenades at the base and detonated two cars with explosives. They were close to approaching because they disguised themselves as UN soldiers.

Since 2013, 162 soldiers have died in Mali. This makes it the deadliest peace operation ever. At the end of February, four blue helmets from Bangladesh were killed when a bomb exploded near their vehicle.