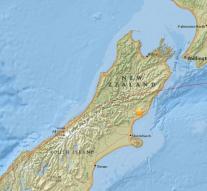 - Again, New Zealand rocked by an earthquake. This time the earthquake had a magnitude of 6.3. The epic was downtown, near the coast of the North Island, 138 kilometers from the city Palmerston North. The earthquake occurred at a depth of 37 kilometers.

The earthquake occurred Tuesday (local time) place more than a week after a powerful earthquake measuring 7. 8 at the site Christchurch to two people killed and brought the two New Zealand islands two meters closer together.

Since the earthquake last week, thousands of smaller aftershocks have been recorded.

It is still not known whether there are casualties and the extent of the material damage is.