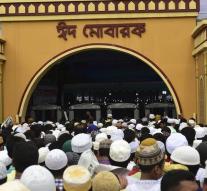 dhaka - By a bomb attack in Bangladesh on Thursday claimed at least four dead and twelve injured. That local media reported. The perpetrators had targeted a ceremony to celebrate the end of the fasting month of Ramadan. Two police officers and one perpetrator are among the dead.

The incident was at the entrance of a school in Kishoreganj, 75 kilometers northeast of Dhaka. At least six offenders fell shortly before the start of a prayer service explosives to a group of policemen. Police arrested two people. The place is close to an area in the city where the biggest party meeting for the end of Ramadan.

The police did not comment on the motives of the perpetrator (s). The Islamic country is increasingly plagued by extremists staging Islam as justification.


The attack comes just days after the massacre last weekend in the capital Dhaka where 28 people were killed, including six terrorists.