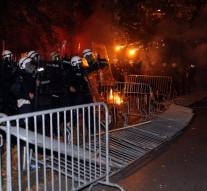 - The Montenegrin police have used tear gas again Saturday against anti- government protesters. About five thousand people were drawn to the parliament building to demand the resignation of Prime Minister Milo Djukanovic.

The protest began peacefully, but after some time still ran out of control. Demonstrators threw include flares and firebombs at police. According to the Government of Montenegro officers were injured during the riots.

The opposition called on Saturday for the formation of an interim government and the writing of " free and fair elections ". It has long been restless in the Balkan country. A week earlier the outside parliament was even a scuffle between police and protesters.