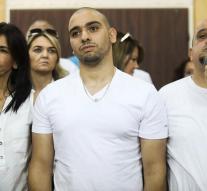 tel aviv - An Israeli soldier who shot a wounded Palestine did not receive a penalty in appeal. The president of the military court called the action of soldier Elor Azaria 'forbidden and immoral' and maintained the previously imposed punishment of eighteen months of cell.

Azaria brought 21-year-old Abdul Fatah al-Sharif to life in Hebron. He had killed an Israeli military with another Palestinian. The other attacker was shot immediately, al-Sharif was injured and could not move when Azaria shot him a few minutes later.

The Palestinian death of an activist filmed a huge commotion in Israel and the Palestinian territories. Azaria fighters also went up the street on Sunday. His mother hit an Israeli flag around him.

The Palestinian authorities had previously just indicated eighteen months of cell far too little. That would give Israeli soldiers' green light '' to kill without impunity. Azaria, found guilty of slaughter, could have had twenty years of cell.