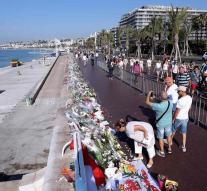 - Two more people have been arrested in connection with the attack on July 14 in the southern French city of Nice where 84 people were killed. There were five people on suspicion of involvement in the attack by the 31-year-old offender Mohamed Lahouaiej Bouhlel.

None of the five who were arrested earlier, was known to the French intelligence services. A source in the judiciary announced Tuesday that the two recent arrests Monday were made. The identity of the duo was not disclosed.

After the attack Islamic State claimed that Bouhlel was 'a soldier of the organization.'