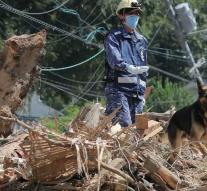 tokio - A heat wave killed five people in Japan and 1500 people had to be admitted to the hospital. It was the hottest in Hiroshima. In that region the mercury increased to 38 degrees, Japanese media reported.

In large parts of the country it became warmer than 35 degrees. In the city of Osaka 156 people had to go to the hospital because they were unwell because of the heat. Japanese meteorologists expect the heat to continue in the coming week.

The warm weather makes it more difficult to clean up the damage caused by the floods. In Okayama, where more than a thousand volunteers helped to clean up, 48 people had to resign because of dehydration and fatigue symptoms.

Japan has recently been hit by unprecedented heavy rainfall and flooding. In addition, more than a hundred people died and hundreds of thousands of Japanese had to be evacuated because their houses were uninhabitable.