Home / World / After explosion at BASF, one missing 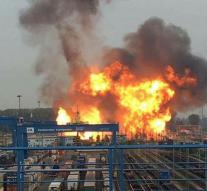 - Rescuers are still searching for one missing after the explosion Monday at the office of the German chemicals group BASF in Ludwigshafen. BASF showed Tuesday that eight people have been seriously injured by the blast. Seventeen others suffered slight injuries.

According to German media divers are deployed to search for the person who is looking for. Immediately after the blast, BASF reported that six people were missing. Later on Monday said the company of two missing.

BASF still in the dark as to the cause of the explosion. Which took place at the end of the morning, during work on the pipeline network. Through which pipes pumps the company ships raw materials to the factory. Indications of an attack are not there.