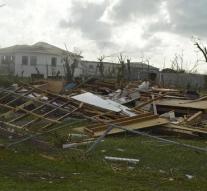 codrington - The island of Barbuda threatens to be hit by a devastating hurricane for the second time in a few days. Helicopter pilots and skippers are engaged in a race against the clock to evacuate remaining residents before José arrives on Saturday.

Neil Dickinson and his two helicopters play a leading role in evacuation, according to Bloomberg press office. At present, ferries and other ships are also being used to attract people from the island, but it is questionable how long sea conditions allow the use of such vessels.

It is unclear how many people are still on the island, largely destroyed by Irma. 'From the simplest houses to complete resorts: no one in Barbuda is spared. It was Armageddon, 'said Dickinson between flights in a telephone interview. 'We will fly as often as possible to get people away. '

The owner of the company Caribbean Helicopters estimates that there are currently fewer than a thousand people in Barbuda. His helicopters can transfer six people per flight to Antigua, which is about sixty miles away. The pilots of Dickinson earlier brought the premier of the archipelago to Barbuda to take up the damage. They returned with the body of a two-year victim.

Premier Gaston Browne returned shocked from his inspection of Barbuda. He said that 95 percent of the homes on the island were destroyed or damaged. 'We flew to Barbuda and found total destruction. It was emotionally one of the most painful experiences of my life, 'he told the BBC.