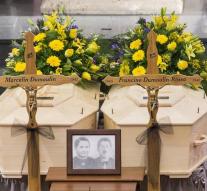 saviese - The couple who lived in a glacier in the Alps for 75 years, was buried in the Swiss village of Saviese. A melting glacier gave the bodies of Marcelin and Francine Dumoulin (40 and 37) last week prize.

The couple had seven children, two of whom are two daughters. A now 79-year-old daughter Marcelline described the funeral as 'the most beautiful day of her life.' Earlier, this daughter already knew that she had been searching for her entire life for her entire life.

Marcelin and Francine disappeared on August 15, 1942 when the couple drove into the mountains to milk cows. A ski resort employee found their mummified bodies at 2600 meters altitude. A DNA test confirmed that it was about the Dumoulin family.