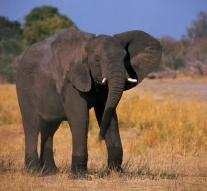 - It's much worse with the African elephant than imagined. Over the past seven years, the population has shrunk by a further thirty percent. Since 2007, there are 144,000 fewer elephants, the vast majority were slain by poachers for the precious ivory teeth. Reported Great Elephant Census, which for a count hundreds of flights carried out over the continent.

The researchers came in eighteen countries to a total of 350. 000 elephants. That is much less than previous estimates. The vast majority is in Botswana: 130. 000. The country performs as one of the few countries in Africa to combat stoperij.

Because there are relatively many animals running around in the country, poachers would also increasingly within the country are active. Also seem to feel the elephants that they are better off in Botswana. That the researchers conclude based on the movements that make the animals.


The smallest population was found in Cameroon, where there are only 148 left. In Cameroon it appears a massacre going on. eight bodies were counted every ten live elephants. Scientists expect that more quickly not all elephants will run in the country.

According to the researchers, the figures are reliable and the method of counting endorsed by international researchers.

For the colonization of Africa, there would have about 20 million elephants around stepped on the continent. In 1979 censuses were not more than 1. 3 million.