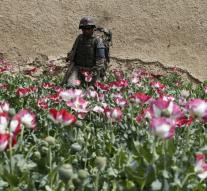 - The production of opium in Afghanistan this year is half lower than in 2014, according to A report from the UN agency for drugs and crime (UNODC) . In the country this year is expected to be 3300 tonnes of opium produced against 6400 tons last year. Opium, which is extracted from poppy, is a raw material for heroin.

Poppy cultivation had to do with a lack of water, leaving many plants did not make it. The area where poppy is grown has declined by 19 percent compared to last year and now covers 183 000 hectares.

The Afghan authorities are trying to reduce opium production by destroying poppy fields. In 2015 was 3760 hectares cleared of poppy fields, 40 percent more than in 2014.

Most of the opium produced in southern Afghanistan, especially in the regions of Helmand and Kandahar.