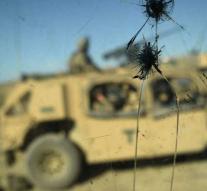 kabul - An American soldier was killed in the Afghan capital Kabul on Saturday by an attack from the inside. Another was injured, reported the NATO mission Resolute Support.

'The first reports indicate that the attacker belonged to the Afghan army and that he was immediately killed by other Afghan soldiers,' the mission said in a statement.