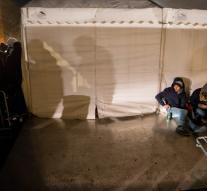 eggesin - Two Afghan refugees in the German state of Mecklenburg-Vorpommern attacked by four men. The perpetrators were asylum seekers in the town of Eggesin ambushed. Then they dragged them into the ground and trampled on them. The victims (29 and 26) had with head injuries to the hospital, but not seriously injured.

First reports were the perpetrators in Germany. Why the refugees were attacked is not known. They are certainly not robbed, police said.