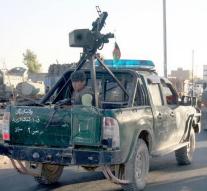 kabul - Afghan troops on Thursday responded to the attack by the Taliban in Tarin Kowt and driven back the radical Islamist insurgents.

That Abdul Kawi, the chief of the security service in the capital of Uruzgan province, said. Government units received air support from helicopters and warplanes. Which bombed positions of the Taliban.

According to Afghan media led Abdul Raziq, the police chief of neighboring Kandahar, the counter-offensive. He has a formidable reputation in the fight against jihadists. Residents of the city reported shot changes and explosions. Earlier in the day said police officers had left their post without a fight and were beaten on the run. In the area around Tarin Kowt for several days fighting firm. The Taliban promised defectors Wednesday amnesty.