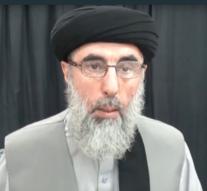 kabul - The Afghan government on Thursday signed a peace agreement with one of the oldest and most notorious extremist Muslim movements, the Hezb-i-Isami of the 69-year-old Guldbuddin Hekmatyar. He has been fighting for decades against the central government with its relatively small group of jihadists. The government hopes that the deal with Hezb-i-Islami insurgent inspires others to also seek an arrangement with Kabul.

In the eighties, Hekmatyar received strong support from among others the US, Pakistan and Saudi Arabia to bombard the Russians in Afghanistan. In the years of civil war that followed, Hekmatyar acquired a bad name by attacking civilians and residential areas. Washington later designated Hekmatyar as terrorist.

According to the agreement, the prosecution of past crimes committed by Hezb-i-Islami stopped and imprisoned members released from the movement. Hundreds of Afghans marched Thursday against the agreement, which they called treason and criminal.