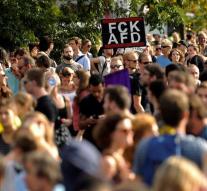 - If all of Germany Sunday would go to the polls, was the populist party Alternative for Germany (AfD) the third party in the country. The movement has passed the Greens. Christian Democrats (CDU / CSU) and Social Democrats (SPD) remain the greatest.

The survey is in the Sunday newspaper Bild am Sonntag. CDU and CSU sister party get together 34 percent of the vote. The SPD has 23 percent of Germans behind him. AfD has climbed to 12 percent, the Greens stand at 11 percent.

Mecklenburg-Vorpommern elect a new parliament Sunday. The AfD is participating for the first time and is heading for a very good result.


The rise of populists is not the fault of the refugee policy of Chancellor Angela Merkel, says its interior minister, Thomas de Maizière.,, We see in Europe the rise of right-wing populist parties. Germany has long been the exception, '' De Maizière said in an interview with Welt am Sonntag. It has not, according to him due to political decisions, but with uneasiness and nostalgia.