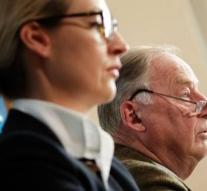 berlin - The Alternative for Deutschland (AfD) received the most votes in Saxony on sunday. The right-populist party remained the CDU of Angela Merkel with 0.1 percent in the East German state.

The AfD seems to be the third party of Germany, according to exitpolls, but ended in Saxony in the first place. The party received 27 percent of the votes in the state. The CDU remained according to German media at 26.9 percent.

Also, AFD-prominent Frauke Petry conquered a so-called 'direct mandate'. Germans not only vote on a party but also vote on an individual candidate. Petry may represent Switzerland-Osterzgebirge in the Bundestag. Two other AFDs also acquired such a 'Direct Mandate' in Saxony.