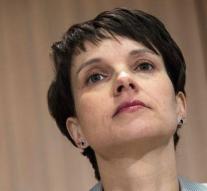 berlin - The party chairman of the Alternative für Deutschland (AfD), Frauke Petry, declared the day after the German elections not to be part of the AFD group.

The right-populated AFD won nearly 13 percent of the votes on Sunday and comes first in the German Lower House. Petry has been elected as a parliamentarian.

SEE ALSO: Defeat for German coalition coalition Petry has long been hoping for other top figures of the AfD, especially the list tractors Alexander Gauland and Alice Weidel.