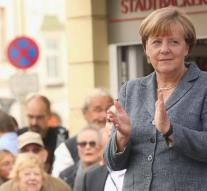 - The anti-immigration party Alternative for Germany (AfD) to Sunday according to polls count on election victory in Mecklenburg-Vorpommern. It is the ninth state in which the three-year-old populist AfD enters the parliament (Germany has sixteen federal states).

Immigrants and refugees are hardly in the northeastern state, but the skepticism about the established order and the rising criticism of the refugee policy of Chancellor Angela Merkel (CDU) AfD can make the second or third party.

The regional AfD party leader Leif-Erik Holm even hopes to come as the biggest out of the bus. A huge victory of the AfD would Merkel, who is considering re-bidding, can cause substantial damage to the CDU party leader. The state has its political base and the government of Mecklenburg-Vorpommern is like her federal government coalition of the Social Democratic SPD and Merkel's Christian Democratic CDU.

In polls in the state, the CDU with almost identical with the AfD around 22 percent. The SPD state premier Erwin Sellering loses according to opinion polls enormously, but remains the largest with 28 percent. The arrival of the AfD almost all parties lost voters according to polls, including the far-right NPD.

The state has 1.6 million inhabitants and is relatively poor. About 3.7 percent are foreigners many of whom are ethnic Germans from Eastern Europe and Poland. The gross domestic product (GDP) of around 25 000 per capita is 33 percent lower than the German GDP. The unemployment rate of 9 percent is very high by German standards. Yet thanks to better economic policy goes from Sellingers coalition government, but that does not seem important issue in the election campaign mainly focuses on the refugee issue.