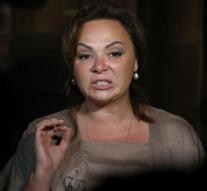 moscow - The Russian lawyer who met with Donald Trump's eldest son last year is willing to testify to the US Congress. 'I'm ready to clear the situation around this mass hustle,' said lawyer Natalia Veselnitskaja in an interview with television channel RT. 'But only through lawyers or by witnessing in the senate.'

Donald Trump junior recently released emails revealing that in June 2016 he wanted to speak to the advocate who might have information that was harmful to Hillary Clinton, the then Democratic opponent of his father. He had been told that Veselnitskaja represented the Russian government.

The issue is sensitive because of the alleged Russian interference in the US presidential election. Veselnitskaja stressed earlier that he had no ties with the Kremlin. Nor would she ever have had harmful information about Clinton.